If you’ve ever had the good fortune of getting your hands on a classical European or French cookbook with pictures of the kitchen and their chefs (I know there aren’t many so you must be truly lucky to have seen it), you might have noticed something that isn’t commonplace in today’s kitchens. Chefs and bakers of the past, at least those that have been recorded, were huge promoters of copper bowls being used in the pastry sections instead of steel or iron. Like most chefs, they barely ever disclosed the reasons or tried to explain the science to their proteges.

As the years passed by, the minute details of food that held great importance gave way to theatrics and expensive wines. Slowly, the more traditional methods such as using copper bowls in the bakery started to fade. But why was it tradition in the first place? Is there science behind it or has the process been blindly followed for centuries? Let’s find out.

Turns out there is an actual science behind why chefs had an affinity towards copper bowls. Simply put, egg whites have a natural tendency to whip better and stay whipped for longer if a copper bowl is used. Before we delve into the science of why copper is better, let’s talk a little bit about the science of whipping egg whites. As you whip egg whites, the tightly wound protein structures are broken up and separated. As air gets incorporated into the whites, the same protein structures trap this air and form a network around it, trapping it in a “foam”. The more the egg whites are whipped, the tighter the protein structures get. After a point, the bonds among the proteins will start pushing out the water that is part of the egg, resulting in a “broken” foam, from which there is no going back. 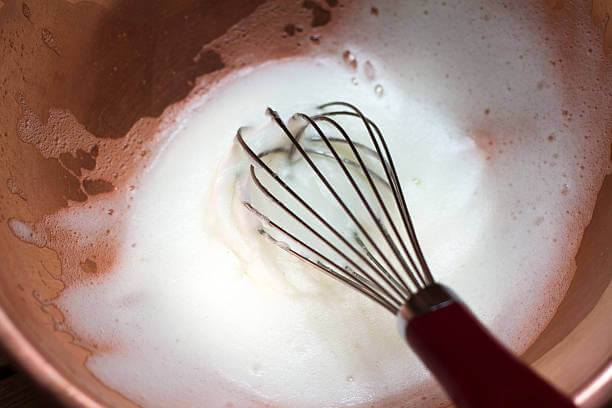 When a copper bowl is used to whip egg whites, little, imperceptible ions of copper are broken off from the bowl and start to form bonds with the protein structures especially with a protein called conalbumin. The conalbumin structures are much stronger when whipped and are very hard to denature (break). Not all of the proteins form bonds with the copper ions, but some do, which means there is a much lower chance of the other proteins causing a breakdown of the egg white foam. Another role that copper plays in the stabilizing of egg foams is the reaction that it has with sulfur. The presence of sulfur in eggs has been a well-known fact for a while (who wouldn’t guess its sulfur when eggs start to smell?). The copper ions can bind with the sulfur containing structures in the proteins and strengthen the egg foam even more.

Well, this proves that our ancestral chefs weren’t mad scientists or metallurgy experts, they were just more in tune with nature and its offerings. Other than that, they were great at preserving culture as there is no other way for knowledge like this to pass onto the next generation if the words of the previous generations aren’t revered. Now our generation must make sure to pass on a few egg hacks because nobody in future kitchens is going to be using copper bowls to make meringues. So, scream it from your windows: Cream of Tartar will do the same thing as copper bowls!