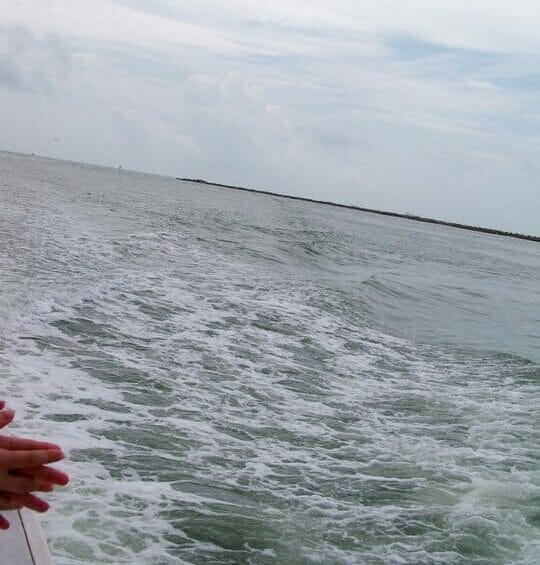 A delicious but relatively simple assemblage. The ingredients are most readily at hand the day after Thanksgiving in the conventional American household. Buttery mashed potatoes and tart cranberry sauce compensate for the notorious dryness of turkey meat. The sort of sandwich you should expect to fall apart.

1 – Spread the potatoes onto one slice of bread and the cranberry sauce onto the other. Place the turkey breast in between the two slices and consume.

2 – As you eat, imagine that this combination is completely novel for you (you may not have to). Imagine that you did not grow up eating this combination of foods once a year, sitting around a large table with Hallmark lighting, bickering with extended family members after someone has said grace. Instead, every fall, if the holiday schedule at you and your sister’s school lined up with the holiday schedule at your parent’s school you went to a beach town on the barrier island along the coast, once the slightest hint of winter had cleared out the college-aged partygoers. You would go to the bookstore, visit the sea turtles, walk along the empty, stormy beach and poke washed-up jellyfish with sticks. On Thanksgiving morning your sister would insist on turning on the televi sion and watching a parade in a city that was very far away and you had no memory of ever visiting, though your parents had pictures to show that you had. In the evening your family would cook green beans, frijoles, calabasitas. Without the meat centerpiece, you feasted on all the trimmings, plus a store-bought pecan pie. Someone would invariably bring up the time your vegan grandmother attempted to Frankenstein a turkey out of tofu. You still do not understand how attachment to a memory of a now forbidden food could drive you to commit such an offense. The taste of freshly baked bread and chipotle-laced pinto beans would stick with you the longest, along with the steam rising off of the pool on rainy days and the sight of a dying seagull, hanging by its neck from the power lines, struggling as its confused fellows fussed around it.

3 – Imagine, years later, you were too far north to visit your parents but your short holidays would give you the chance to visit your sister, who now lived a couple hours bus ride from you. She still insisted on watching the parade in the morning, but you since had seen the city with your own eyes and remembered it. In the evening, you did have a traditional Thanksgiving, complete with the saying of grace beforehand, though you ate sitting on the floor around the living room coffee table with her roommate and her cat. Your sister told the story of a college professor who deep-fried his turkey (supposedly the best way to keep the meat of the bird juicy behind crisp skin) alongside the story of your grandmother’s Tofurkey.

4 – The small size of the party means that there are plenty of leftovers. The next day, you concoct this sandwich, inspired by a suggestion from your sister’s roommate, who knows much more about thanksgiving leftovers than you. As you chew, this combination of flavors joins the taste memory of smoky beans and bread as well as the imagined memory of chewy, umami imitation meat and the imagined memory of a bite of fried turkey, no longer forbidden, the meat juicy behind a cracklingly crispy layer of skin. In the end, you’re eating the perfect Thanksgiving leftovers meal, layer upon layer of taste memories, your own and those of others, all squished between two slices of bread.

1Poultry eaten almost exclusively during the holidays in the United States, its name a testament to the apparent confusion among Europeans surrounding its origins. French, Russian, and Dutch cite India as its native land, while English cites the Ottoman Empire and Portuguese, a bit closer than the rest, cites Peru. The bird, native to the Americas, was first domesticated and bred for meat in Mexico, where the Mexica called it wueh-xolo-tl and their descendants call it guajolote. In a ritual originally stemming from an attempt to appease the poultry industry, the President of the United States pardons a turkey every Thanksgiving, while 45 million more end up on dinner tables. Funny thing, pardoning an indigenous bird from a death sentence on land colonized through genocide.

2Another ingredient of the Americas, this time domesticated in what is now Peru 10 000 years ago. Originally considered poisonous by Europeans, this nightshade’s cultivation as a food crop fueled at least a quarter of Old World population growth between 1700 and 1900.

3North American cranberries, named for their flowers’ apparent resemblance to the Sandhill crane, were initially harvested by the Wampanoag people of what is now Massachussetts for 12 000 years. The berries were consumed fresh or used to make pemmican, a trail food made of berries, dried meat and animal fat. Early European colonists, familiar with Eastern Hemisphere varieties of the fruit, used it to cook jams, sauces and other sugary preserves as their descendants still do today.

4Leavened bread made from wheat flour is most decidedly an Old World food item, perfect for smashing these New World ingredients together, despite the vast geographic and cultural distances separating their initial use as food products.

This website uses cookies to improve your experience while you navigate through the website. Out of these, the cookies that are categorized as necessary are stored on your browser as they are essential for the working of basic functionalities of the website. We also use third-party cookies that help us analyze and understand how you use this website. These cookies will be stored in your browser only with your consent. You also have the option to opt-out of these cookies. But opting out of some of these cookies may affect your browsing experience.
Necessary Always Enabled
Necessary cookies are absolutely essential for the website to function properly. These cookies ensure basic functionalities and security features of the website, anonymously.
Functional
Functional cookies help to perform certain functionalities like sharing the content of the website on social media platforms, collect feedbacks, and other third-party features.
Performance
Performance cookies are used to understand and analyze the key performance indexes of the website which helps in delivering a better user experience for the visitors.
Analytics
Analytical cookies are used to understand how visitors interact with the website. These cookies help provide information on metrics the number of visitors, bounce rate, traffic source, etc.
Advertisement
Advertisement cookies are used to provide visitors with relevant ads and marketing campaigns. These cookies track visitors across websites and collect information to provide customized ads.
Others
Other uncategorized cookies are those that are being analyzed and have not been classified into a category as yet.
SAVE & ACCEPT